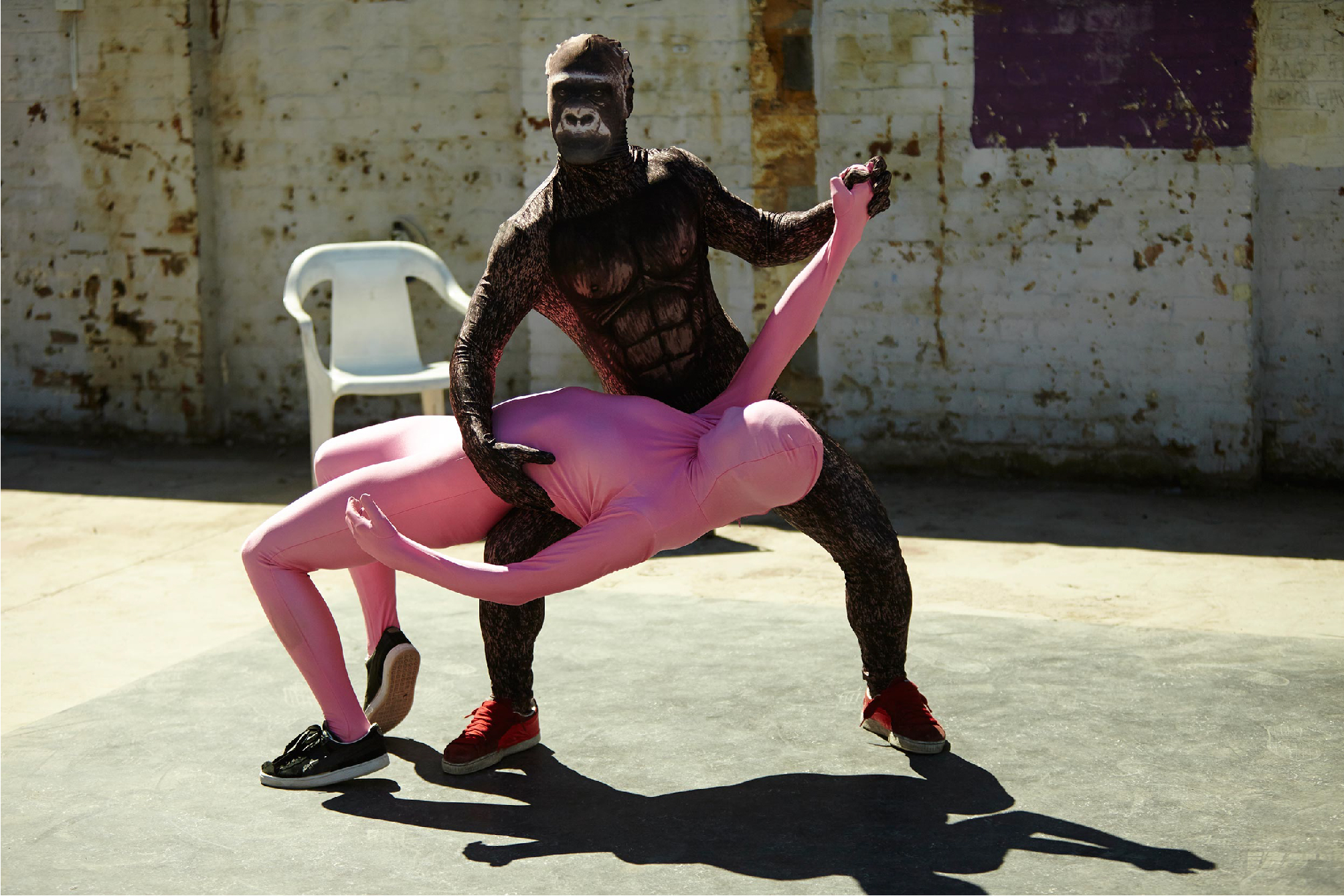 FANCY DRESS AND COSTUMES HAVE ALWAYS BEEN A BIG PART OF OUR LIVES. IT STARTED AS CHILDREN WHEN OUR PARENTS USED TO DRESS US UP FOR THE ANNUAL TOWN FAIR, EVEN AT THAT YOUNG AGE WE LOVED THE RESPONSE AND ATTENTION THAT WE GOT, THE NEW FRIENDS WE MADE AND WE WORKED OUT THAT FANCY DRESS COSTUMES MADE LIFE A BIT MORE FUN. WHILE AT UNIVERSITY IT WAS MUCH THE SAME BUT WITH THE ADDITION OF A BIT OF BOOZE. HOWEVER, WE GOT MORE AND MORE HACKED OFF WITH THE POOR QUALITY OF THE COSTUMES SO USUALLY WE MADE OUR OWN...

Then we met Mr Blue. This is where it all began. Gregor, Fraser and Ali attended an athletics (read: drinking) competition where the theme of the weekend was 'wear one colour’. Our best mate Stew Walker rocked up in a dodgy fetish suit, he couldn’t see much and it didn’t fit well but he was King of the party that night. That was our eureka moment… Inspired by Mr Walker’s dodgy outfit and the reactions it received, we thought that we could develop the idea into an awesome fancy dress costume. We worked for months designing, prototyping and tweaking to get the quality and design just right so you could see out, but no one could see you. Then we ordered some suits - just 6 plain colours to start with. We set up a website for $700 (I know what you’re thinking, “that much!”) and Morphsuits phenomenon was born.

Armed with some smart ideas and a buoyed with some marketing on Facebook, Morphsuits all of a sudden really began to take off. To such an extent that Gregor, Fraser and Ali decided to leave behind their ‘normal' jobs as they we were tired from working 7 days a week!

In 2011, we started our bid for global domination and began selling Morphsuits across the globe. It turned out there are loads of crazy people who love Morphsuits all over the world. This meant we got the chance to design and make loads more awesome costumes. Lederhosen costumes for German carnival, Slenderman for frightening the crap out of people in North America, and the Aussie flag to name a few. We also started getting seriously into social media and started the Morph Hall of Fame, some of the famers are below. Then we started girl costumes, pretty impressive I’m sure you agree?

In 2012, after a few years in the costume industry, we thought that there was an opportunity to build on the success of Morphsuits and expand in to traditional (non spandex) costume market. So we took the big decision to take investment from the British Growth Fund (BGF) to allow us do even more stuff. So we trebled the size of the team (the shy retiring bunch you see below), moved out of our living room office into an actual office (blue room) and moved from doing just Morphsuits to non-Spandex costumes because it seems that spandex isn’t for everyone (who knew). The big thing we learnt is that awesome non-spandex costumes let you boss parties just as well as Morphsuits. We now do Saving Private Morph, Tetris and Block Head costumes to name a few.

Costumes: 178 costumes - all of the above and Digital Dudz T-shirts and Christmas jumpers

Morphsuits went digital. This is mainly down to having met a Nasa scientist Mark Rober. After Mark helped put the Mars Rover on the Planet Mars, he created an amazing Halloween costume which featured some digital trickery to 'blow a hole through his stomach'. After totally owning the Halloween party, he posted the video to YouTube and a couple of million views later, he started his own costume company called Digital Dudz. In 2013, Morphsuits merged with Digital Dudz because he is a brilliant, genius costume designer (and a great guy) and have been incorporating his digital innovations into our costumes since. Our current thinking is to give our Superhero range real super powers, check out Spider-man’s web blaster. We also moved into Xmas sweaters because that was another occasion to have a laugh.

2014 is all about the relaunching the brand and upping our game when it comes to creating the most amazing costumes in the world. We started as Morphsuits, we're best known for the word 'Morph' but as we've grown we've started to sell non-spandex costumes, so we're changing our name to MorphCostumes. Makes sense. To tell people about this we've made an advertising campaign called GetMorph. Our costumes are so impactful (we think anyway) you get more than just a costume, you get more, you get more good times, more fun, more ladies. Putting Morph infront of words beginning with F makes it sound like 'more'. Try it out MorphFamous, MorphFriends, MorphFunky.

2015 is all about building on the successes of 2014! After we rebranded ourselves as MorphCostumes from Morphsuits in 2014, we are determined to become the best and most innovative costume creators on the market too - we did create the Morphsuit after all. We set this goal and aim to make it happen by expanding our range of traditional costumes. We’ll do this by talking closely with suppliers to hand select the funniest, scariest, and best costumes from a range of companies to ensure that Morphsuits.co.uk is the number one place to go for the world’s best costumes. And we aren’t forgetting about our trusted Morphsuit, introducing brilliant new designs (if we say so ourselves) such as the officially licensed Stormtrooper Morphsuit and 3D attachments to suits like the Boil Monster’s neck and the teeth on our Jaw Dropper Morphsuit range. Told you we’re home to the coolest costumes around!

It’s been a busy and very exciting few years for MorphCostumes! We now have a range of our very own costumes alongside our market leading Morphsuits (which will always have the most special place in our hearts), a brilliant range of officially licensed costumes and we’re developing more and more of the most innovative and unique costumes that can be found anywhere in the world! Our Piggyback range of costumes create a brilliant illusion that will fool anyone, especially after a beer or two! We’re super, super proud of these. Our brilliant website caters to all tastes, while we've also established ourselves as a huge presence and one of the most fun and trusted costume sellers on Amazon in both the US and UK. We are always incredibly excited for Halloween, but Christmas, birthdays, stag nights out with friends and the European Carnival season are all super important too. In fact, just about any and every chance to put on a costume you can think of matters to us! Enjoy and we hope to see you back at MorphCostumes soon.

So yeah, it's been a pretty wild few years hasn't it? The global pandemic may have had a pretty rubbish effect on partying, but we're pleased to say that not only did we come out the other side in good shape, we're actually stronger than we've ever been. Our talented and lovely design team have helped create more original and unique costumes than ever before, while we were also delighted to sign a deal to sell officially licensed Disney costumes throughout the UK and Europe! These days, we're all super happy to be back in the office (we have a pretty cool office to be fair) and we're all working harder than ever to help you party hard and look fantastic. The world is back and we're all ready to have a damn good time!